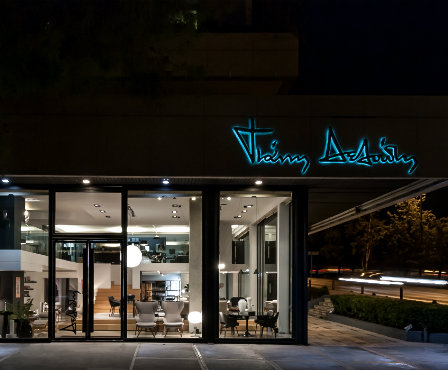 Deloudis SA is a company specializing in the area of designer furniture in Greece for more than 40 years and is the exclusive representative of B&B Italia, Arclinea, Cassina, Edra, Flos, Flexform, Poliform and Herman Miller among many others.

Founded in 1972 Deloudis was the first company worldwide to import and represent B&B Italia and Cassina. Deloudis has presented many well known architects and designers to the Greek public, such as Piero Lissoni, Alessandro Mendini, Marc Newson, Ettore Sotsaas, Marcel Wanders and William Sawaya. Since the founding of the company, Deloudis SA has developed a uniquely diversified portfolio, covering the needs of the home, kitchen and office, as well as operating a B&B Italia mono brand store. In terms of physical presence, Deloudis SA has established 6 showrooms in addition to privately owned corporate headquarters of 5000 sqm, wherefrom essential management and coordination of the company takes place.

The company occupies 40 employees and 15 exceptional training fitters. The coordinated image of the showrooms follows rigorous principles of minimalism, functionality and high quality, principles that have solidified the image of absolute aesthetics in the Greek public’s mind until today. With a high level of presentation in each store and with a great emphasis in aesthetics and visual merchandising, Deloudis SA contributes to the promotion and knowledge of design culture.

Throughout the years Deloudis SA has won many prizes and awards. The most distinguished was that in 2007, where the President of the Italian Republic, Mr. John Napolitano, awarded Mr. John Deloudis, for his contribution in design and made the company a member of the International Honorary Council of Altagamma.

A further distinction was bestowed on the company in 2009, when, in recognition of more than 35 years of holding the prestigious title of being the leading company in the design field, Deloudis SA was honored by the Italian ambassador in Athens.

During the past decade the company has been running under the management of Mr. Konstantinos Deloudis. Throughout this time the company has developed and grown in line with an ever changing design market. The company has further enriched its portfolio with world leading design brands including Arflex, Bocci, Henge, Knoll, Lasvit, Tribù, Cesar, Glas Italia, Poliform, Röshults, and Thonet and opened its first store abroad in Limassol, Cyprus.

Experimentation of the new generation of management to keep up with current trends, led to the launch of Delood.com, an online design destination for all design aficionados. Most recent was the very successful launch of Deloudis e-shop, an online design boutique with a carefully curated selection of our best-selling pieces and design classics.

Deloudis SA aims in always upgrading and updating its business, thus remaining the ultimate design retailer in Greece and Cyprus.

We would be very happy to receive your requests for our assistance in creating a unique environment in your personal or professional space. We have assembled a team of highly experienced professionals who are at your disposal to aid you in selecting the ideal furnishings for your bathroom, kitchen, home and office. Our comprehensive service is not only available in Greece, but also internationally and our associate carriers are committed to ensure a safe, efficient delivery of your orders, anywhere in the world by land, sea or air. Through our 40+ years in the field of interior design, and our collaborations with the finest global brands, we are in the position to work with you, to inspire and advise on the enhancement or redefinition of your home or office area, your needs become our needs. We look forward to hearing from you.